Trading Sweetness: The Story of Kara Walker and the Domino Sugar Factory 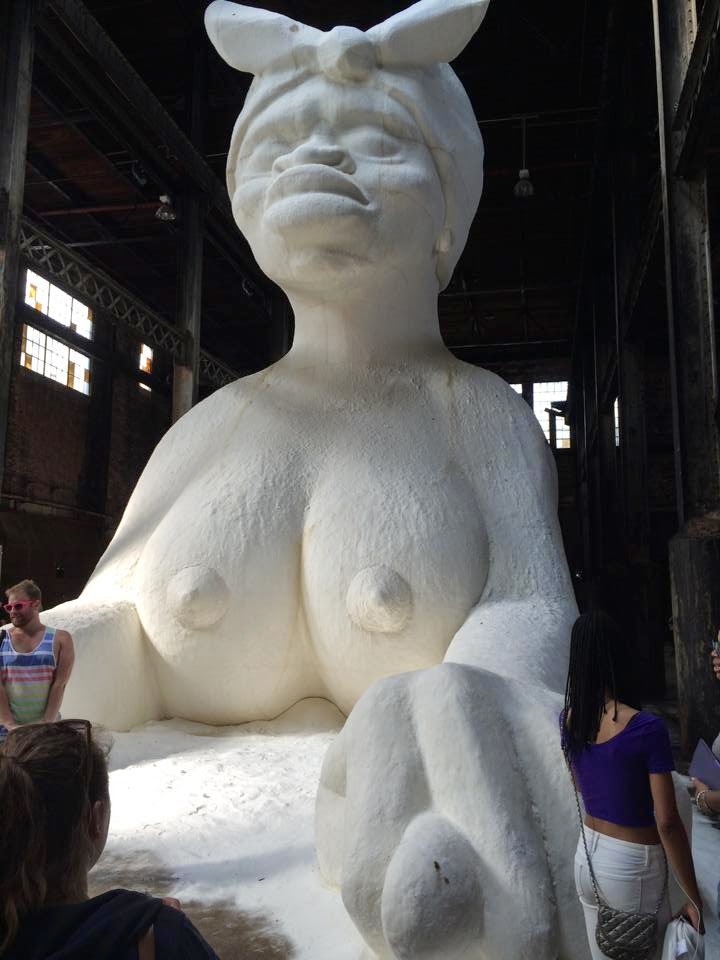 This past weekend, I visited Kara Walker's art instillation at the old Domino Sugar factory in the Williamsburg neighborhood of Brooklyn, NY, along with my wife Maya, my friend Emma, and hundreds (if not thousands) of other people who all waited in line to get in. Once upon a time the largest sugar refinery in United States, supplying the sugar for half the population of the country, it was shut down in 2004, just a few years after one of the longest labor strikes in New York City history. After that strike, more than 200 workers lost their jobs. In a somewhat controversial decision by the city government (which you can read about [here]), the building will soon be converted to condos and apartments, but the developers will attempt to preserve some of its historical legacy and include some much-needed low-income housing. To honor the historical significance of the site, the famous artist Kara Walker was asked to create an instillation which you can visit free of charge until it closes on July 6th when the art will be either destroyed or moved to the Brooklyn Museum and the demolition and reconstruction of the premises will begin. Walker's sculptures are partly made out of sugar, and they comment on the history of the transatlantic sugar trade, including the legacies of slavery and racism, the excesses of consumer capitalism, and the sediment of history within a context of urban decay and renewal. In a conversation about the exhibit with The New Yorker magazine [see here], Walker discusses her own inspiration and alludes to a book with which many readers of my blog "Atlantic Literature" that you are reading now will be very familiar: the classic work by the anthropologist Sidney Mintz on the history of sugar consumption and slavery, Sweetness and Power. 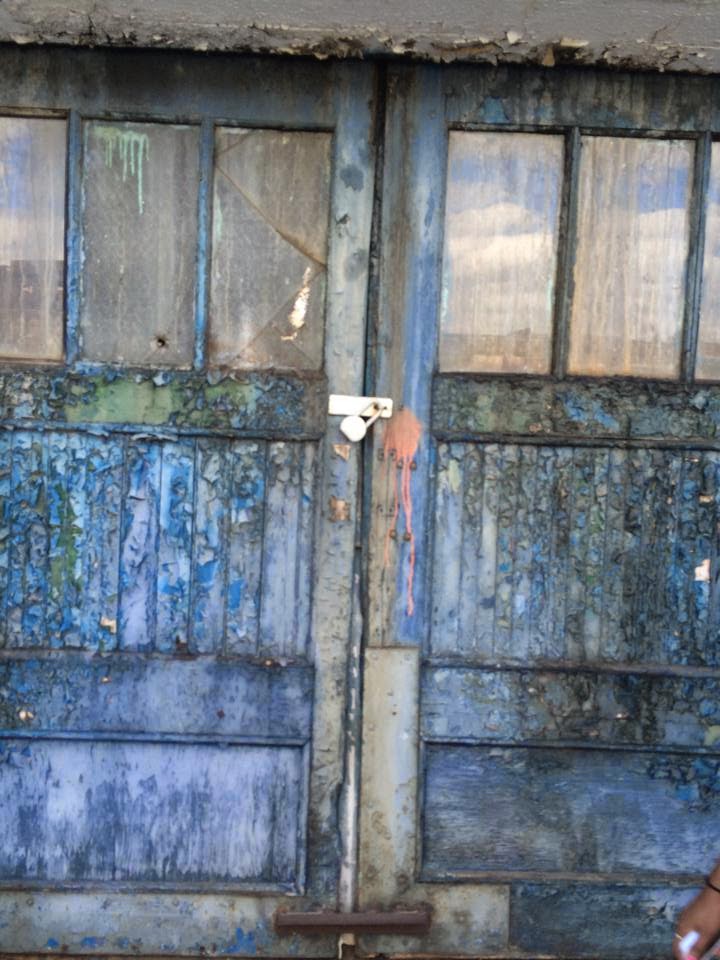 Because both the exhibit and the factory have been photographed and written about extensively elsewhere, I will try not to repeat what has already been said, but instead offer a slightly different perspective with some of my own photographs and thoughts. My own interest is in the literariness of the exhibit, the way it tells a story, as well as the way two of my favorite contemporary authors, novelist Edwidge Danticat and poet Tracy K. Smith, contributed virtually to the story of that event.

But before I give my own view of the event, here are some links to other websites worth checking. The website for the exhibit [here] includes links to the literature by Danticat, Smith, and others [here]. There is also a decent review with a nice photo gallery in the Journal Sentinel. Beyond the exhibit, to learn about the history of the factory, check out this Smithsonian magazine article. For more artistic photography of the factory by the artist David Allee, see this on-line showcase in The New Yorker magazine. 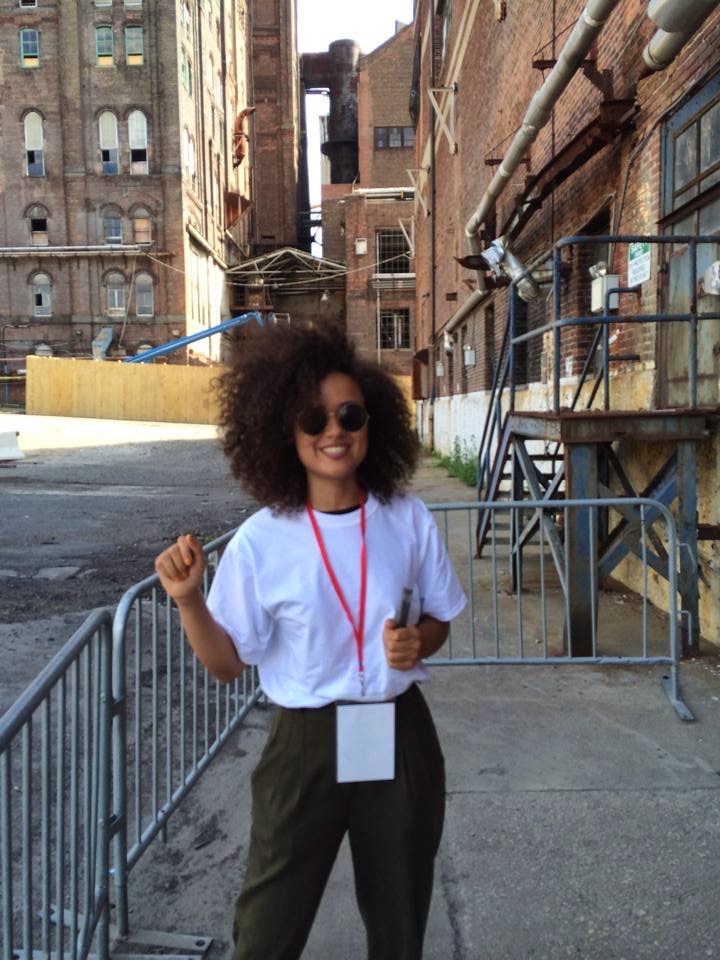 By the time we came to see the event (and it is truly an event), it had already become something of a "must see" just so that you could say that you saw it and that you participated in the memorial before the place was turned into riverside condos for wealthy lawyers, bankers, and other young, and perhaps (we might imagine to ourselves) morally despicable, upwardly mobile professional types, because this is not merely an art instillation, after all; it's also an event -- an event that is itself historical at the same time that it is also a commentary on history, so that it is like history's double, an uncanny doubling. And of course, given my own interest in the literariness of sugar (as my very first published academic article is about a 1764 poem entitled The Sugar Cane), I was doubly motivated to go. 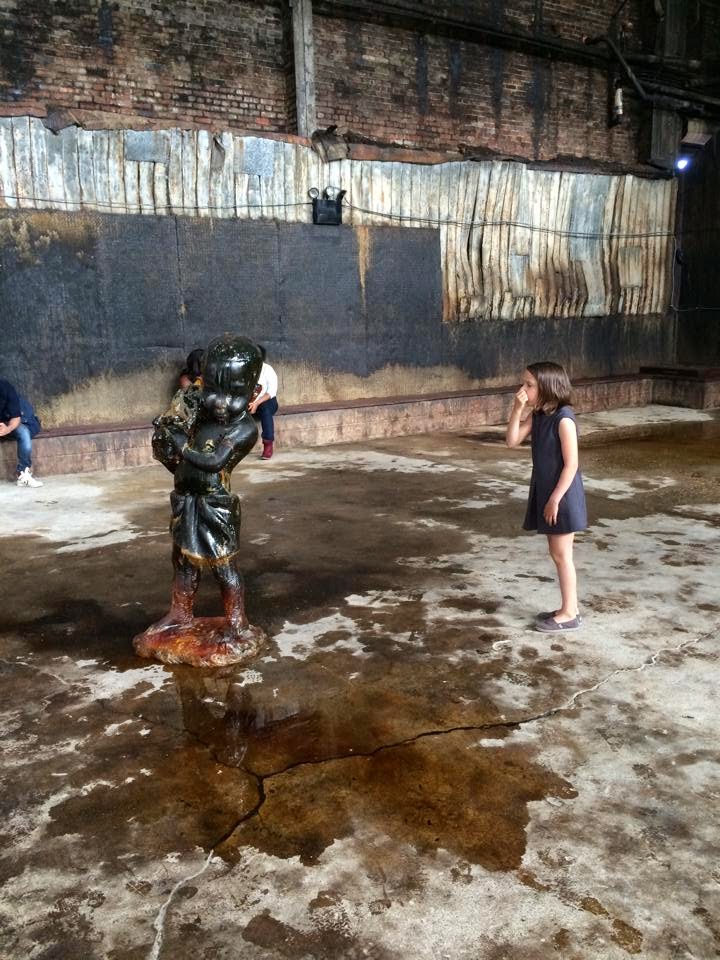 We arrived at 4 pm on a nice summer day and for about half an hour stood in a line that extended two blocks while volunteers in white T-shirts (all pretty young women; I don't know why there were no men) had us sign a legal waiver since the site was a live construction zone. When we finally walked into the cavernous factory room, the smell was a vague residue of burnt sugar and mildew. I thought it smelled kind of nice, but a little girl was holding her nose. We then encountered little life-size statues of slave boys of various colors, from dark molasses to deep red and yellow, scattered about the factory floor. As consumers of this sugar-coated art, we merely walked around. Noticeably, the floor was sticky around the statues. At the far end of the space is an entirely different sort of statue, a gigantic sphinx, coated in refined white sugar, with exaggerated, sexualized features that bizarrely mix the symbols of the famous Egyptian monument with the equally powerful imagery of the American Aunt Jemima mammy. After admiring the imposing front of the sphinx, we walked around the enormous backside and found ourselves, as connoisseurs of art, reluctantly admiring the sphinx's vulva. History doubled over. 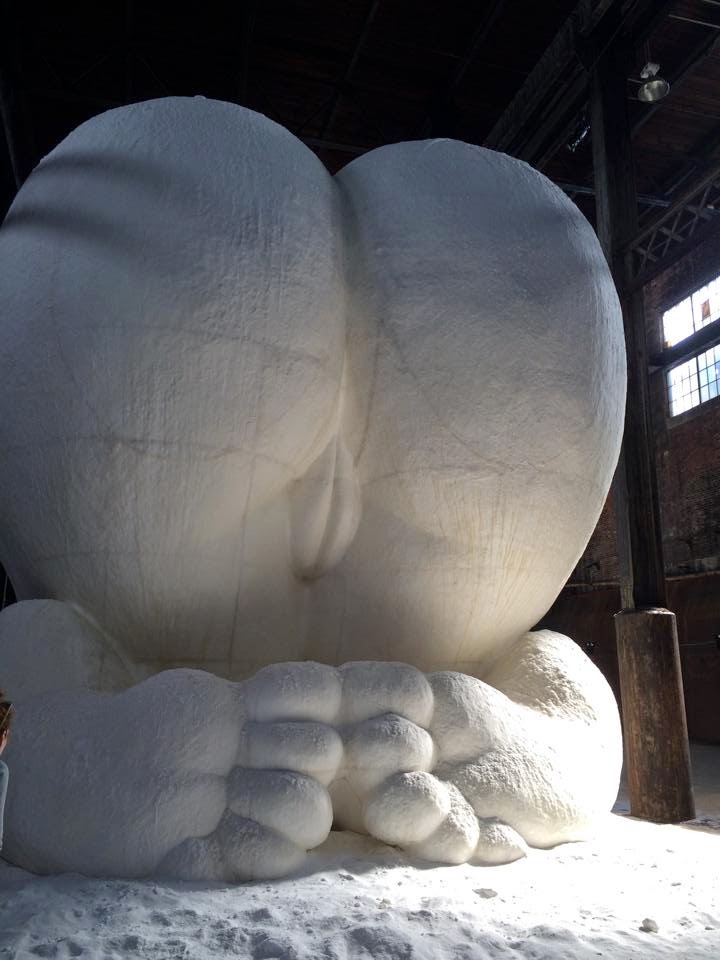 I can't say I know what other people felt or experienced. It seems in many ways the show invites you to come up with your own narrative, but what is inescapable is the connection of sugar production to the labor of black bodies and a history of economic and political oppression. What is less clear is where we are in history, since Walker's postmodernist style alludes to multiple historical moments: ancient Egypt, the eighteenth-century slave trade, and the nineteenth-century high society of New York that would feature such sugar-coated statues at dinner parties, as well as to the context of a rusted factory. Mixing all of these historical references together seems to flatten history out at that same time that it gestures at its depth. Which moment in historical time are we inhabiting as we walk through such Las Vegas-like statuary and this soon-to-be forgotten factory?... Or rather... this never-to-be forgotten factory, if the goals of artwork's commissioners are to be realized. 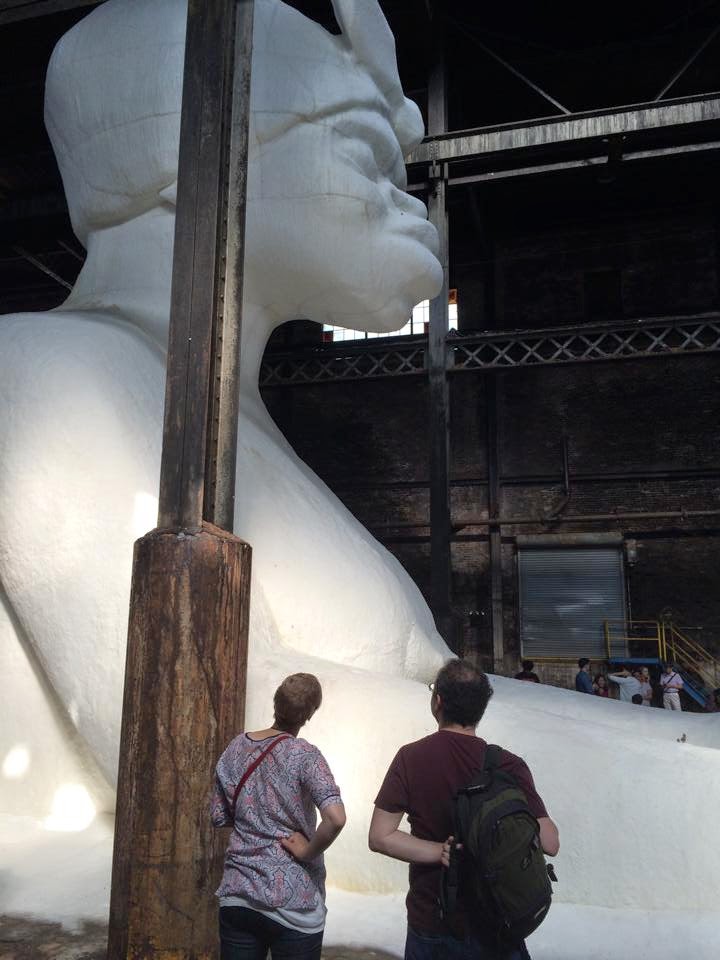 Such temporal uncertainty, I think, is important since the factory was built at the end of the nineteenth century, at a moment that most Americans believe is after the end of slavery; however, contrary to the ideology of progress and the heroism of President Lincoln so often told in popular American movies and elementary school classrooms, in truth the already globalized nineteenth-century American economy still relied on slave labor throughout the world to feed its appetite. Often that labor was managed from afar by businessmen in New York and New England. The indeterminacy of time and place in the exhibit seems to want us to ask when? where? what are the connections? And so, an important and much-needed supplement to Walker's narrative is Edwidge Danticat's essay "The Price of Sugar" that points out how the actual conditions of sugar production have not changed that much, that this apparent artistic commentary on history's ghosts is also our present. Her essay reminds us of the complex multinational configuration of Haitian immigrants in the Dominican Republican doing hard labor for U.S. corporations. 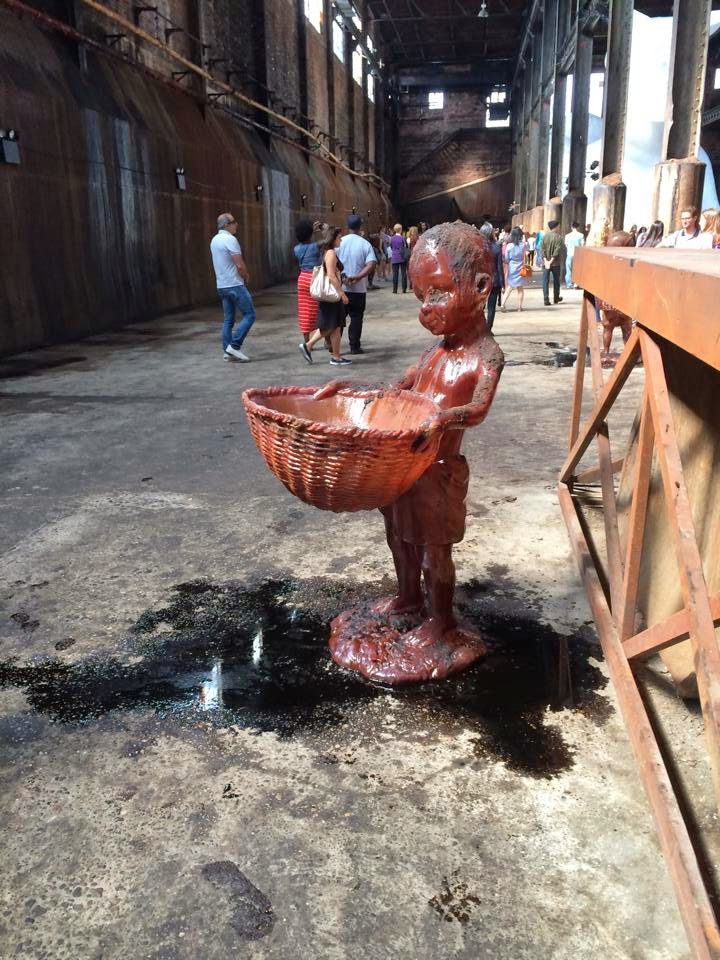 In contrast to the uncanny sense of time in Walker's art that is somehow out of time and place yet also fully present within the depths of history, Tracy K. Smith's contribution to the virtual instillation, her poem entitled "Photo of Sugar Cane Plantation Workers, Jamaica, 1891," is oddly specific about time and place. She begins by putting herself into the photo -- "I would be standing there too," the poem begins -- an imaginary self literally and figuratively "conjured" up by the gaze of the photographer. It is as if she is asking us, the reader, to ask ourselves who we are in relation to this photograph that is just one small trace of a larger history. Her poem reminds me a bit of the world music hit song "Sugar Cane" by Les Nubians, a group my wife and I saw perform in Brooklyn's Prospect Park the year before.

Traces of history. A present suspended in time. An uncanny dialectic. 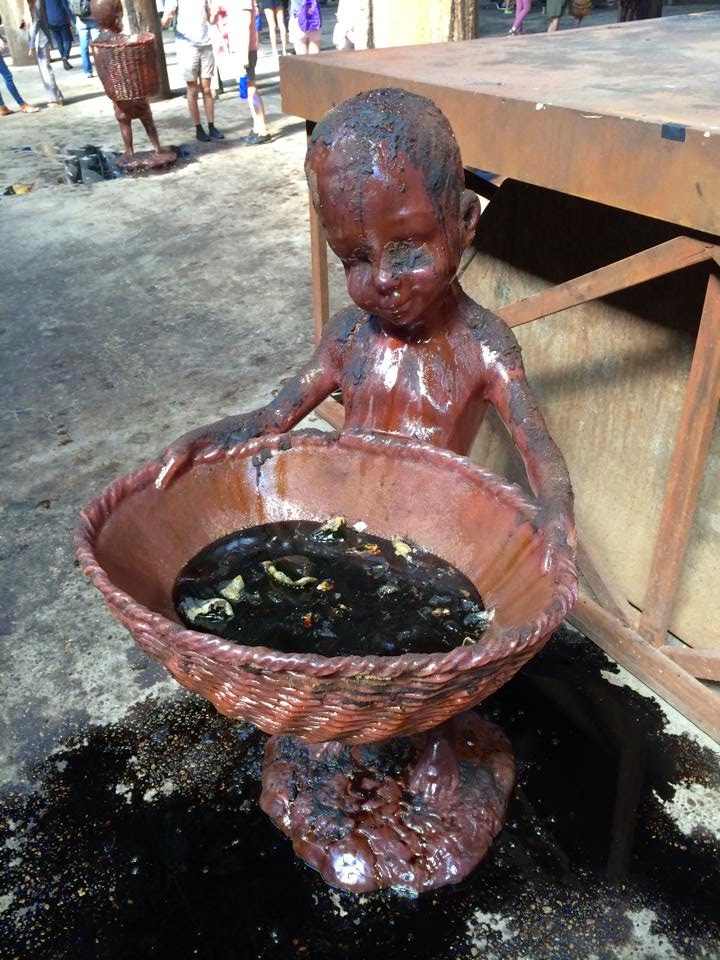 What about other traces? Others perhaps not so present, or perhaps not so absent after all? Obviously, the over 200 workers of the multiethnic labor union of Polish, Italian, Jamaican, Latino, African-American, etc., people, whose impressive 20-month strike failed in 2000-2001 and who are being gentrified out of their Brooklyn neighborhoods that have become such hip and expensive real estate. Perhaps less obvious, the many (unpaid?) volunteers (also multiethnic) who labored to create this artwork about the history of (unpaid!) labor. Perhaps even less obvious, another sort of labor, the sailors (also multiethnic) on the ships that transport the sugar from Cuba, Mississippi, Brazil, and elsewhere. And perhaps least obvious, the insurance on the boats that sank and on the slaves that died (as dramatized recently by the new movie Belle) as well as on the factories that burned down -- the value of a dollar, a piece of rag paper, whose worth is a future's market of land speculation, risk management, and our best guess as to the productivity of human beings and nature.

But also -- as Walker's art provokes to think about -- poetry, sex, witchcraft, and most importantly community. A conjuring and a building.