Cinematic Geography, Historical Time, and Whether to Globalize the Eighteenth Century on the Screen 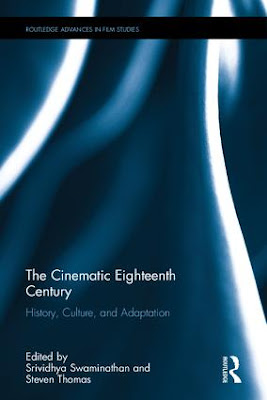 Recently, with Srividhya Swaminathan, I co-edited a new collection of essays entitled The Cinematic Eighteenth Century: History, Culture, and Adaptation for Routledge that as a whole investigates how the eighteenth century is represented in contemporary cinema. The essays by eleven different authors range from analysis of adaptations of novels by Jane Austen and Daniel Defoe to analysis of movies about pirates, slavery, sexuality, mental illness, royalty, the cult of celebrity, and ethnic conflict as well as, of course, satire and parody of such attempts to represent the eighteenth century in movies. All of the essays can, of course, be read individually, depending on the interest of the reader, but our hope is that taken together they will engender a sense of the diversity of the eighteenth century and inspire the reader to make connections among the many different movies, cinematic styles, and topics -- a philosophically rich cultural mosaic. I think this quality of the book is what makes it an original contribution to the academic fields of eighteenth-century studies and film studies.

But the work has inspired a new set of questions for me about the eighteenth century as a period of historical time and how we conceptualize its geography. I could not help but notice that our essays were primarily about films produced in the United States, England, and France about subjects in those three countries, and I could not help also notice the same pattern at the annual conference of the American Society for Eighteenth Century Studies (ASECS). Since early drafts of all but one of the essays were presented at various ASECS conferences, this common feature is not surprising. Although ASECS is officially open to scholarly work about anywhere on the globe, the organizers of its conferences have for a long time expressed a self-conscious frustration over their inability to attract a truly global sense of that historical era -- not simply the desire to include the other continents of Asia, Africa, and South America, but also the other parts of Europe (e.g., Spain, Germany, Italy, etc.) that receive remarkably little attention compared to England and France.

And I certainly share this collective frustration, especially recently since I have been conducting research and teaching classes on African Cinema; my time as a Fulbright Scholar in the film program at Addis Ababa University in Ethiopia will soon be realized in a chapter I co-authored with Teferi Nigussie Tafa on Oromo Cinema for the first scholarly book on the film history from the Horn of Africa (to be published in 2018 by Michigan State University Press.) But what to do?

There are, I suppose, two directions we might take here. One approach is asking how such figures as Robinson Crusoe and Marie Antoinette are appropriated by cinema from other continents. Sometimes the unconscious fetishization of European narratives leaves one with an uncanny feeling about the displacement of a European doppelganger in another space (e.g. the adaptation of Jane Austen novels to Japanese manga comics.) Other times, one appreciates the deliberate critique of European hegemony by the filmmaker via role reversals, ironic exaggeration, etc., in a flipping of the script (e.g., the movie Local Hero set in Scotland, or a recent film on the slave trade by Amma Asante, Belle.) We might also consider the many Italian-made swashbucklers -- films that represent British, French, and Spanish colonialism as absurd sexual farces with rakish pirates (e.g., Blackie the Pirate, 1971.)

But another direction we ought to appreciate as well is a more autonomous representation of local culture entirely unconcerned with Europe. One example of such a films set in the eighteenth century is the Bollywood blockbuster Bajirao Mastani (directed by Sanjay Leela Bhansali in 2015) about Hindu-Muslim relations in the Maratha kingdom; other examples might include the many Japanese samurai movies about the famous 47 Ronin.

Theorists such as Walter Mignolo (in his book Local Histories/Global Designs) and Arif Dirlik (in his book Postmodernity's Histories) have attempted to dialectically work through the problematics of these two approaches. Mignolo proposes something called "border thinking" that foregrounds the diversity of perspectives -- i.e., how a global event might look when framed in terms of a local epistemology rather than a Eurocentric one. One example of this might be the now classic movie Ceddo, directed by Senegal's most famous filmmaker Ousmane Sembene in 1977. The focus on the film is the conflict between the expanding influence of the Muslim Imam over the king and the local traditions of the ceddo (translated sometimes as commoners, other times as outsiders), but in the background of the film is the presence of European colonialism represented by a slave trader and a solitary priest. Hence, while the movie fully attends to the complex dialectic of world history, Europe's role in this history is marginalized while African cultural dynamics are centered.

I'm gathering information about other films, as well as other theoretical approaches, to this topic, so comments and suggestions are most welcome.

Posted by Steven Thomas at 2:59 PM